Previously, we got to the point where we had a WSL distro installed seamlessly to the user's computer, alongside all the shortcuts, bells and whistles of a proper Windows application.
Let's talk a bit about the Windows GUI part of the magic trick.

Since the bulk of the interaction with LANraragi won't be made from this GUI, I wanted to make it as unobtrusive as possible, while still featuring some Fluent Design.

I got some inspiration from Docker for Windows' welcome screen and the OneDrive app in W10, who both pop-up small windows from their tray icons. 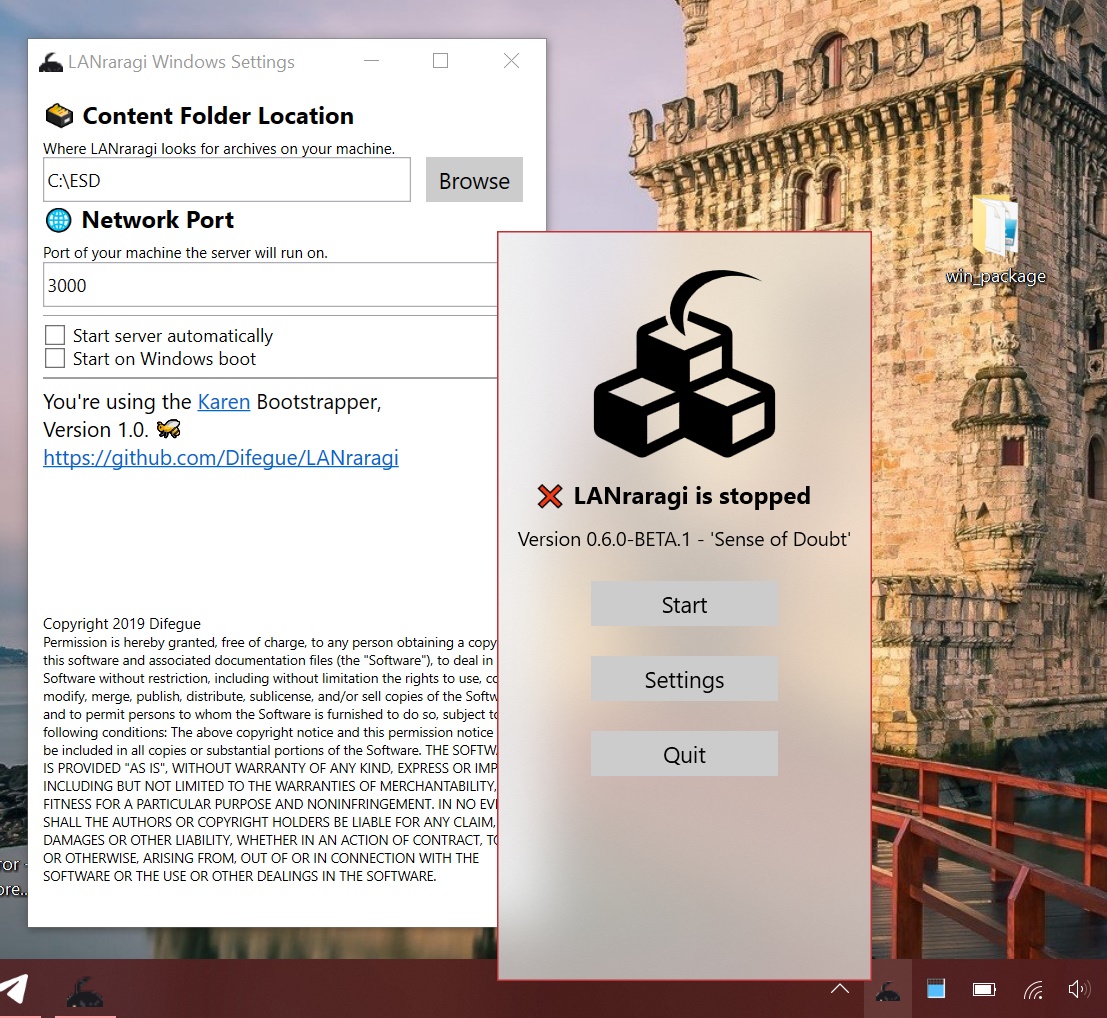 I rolled this handy NuGet package to get the tray icon part out of the way and got to work designin'.

Fluent Design would've been almighty easy to pull off had I used XAML Islands, but I didn't want to be too bleeding edge and restrict the app to 1903 and up purely for cool visual effects. Maybe in a few years. 🏝

Instead, I rolled Acrylic the DIY way, and Dark Theme by looking up the registry. The buttons are just some custom XAML theming.

The final result is probably overkill for an interface most people will only look at for 5 seconds, but I couldn't help it.

The GUI interops with WSL in four different ways.
I expected to use the WSL API to do all of these with P/Invokes galore, but encountered a few hitches where I had to run wslconfig.exe and wsl.exe instead through NET's Process API.

🐧 Check that the Linux Distro is actually installed

WslIsDistributionRegistered flat out doesn't work in a GUI application for now. I had to make due with running wslconfig.exe /l and parsing its output to find my distro name.

(I initially toyed with the idea of being able to uninstall/install the Distro from the GUI using WslRegisterDistribution, which would allow for easy updates, but not being able to specify the folder the distro lands in kinda put a stop to that.)

This version is then displayed on the GUI.
I could've used WslLaunch here to run my one-liner, but the function requires a rather hefty baggage to get started(more on that later). The WslLaunchInteractive variant just works, but it pops up a console and we don't want any of that.

Instead, I simply run my one-liner in wsl.exe and fetch the text result.

When the user gives us his content folder, it's a pure Windows path.
I quickly convert it to its WSL equivalent and setup a symlink to a designated folder in the Linux filesystem:

🆙 Start and stop the Linux server

Using an extra NuGet package, I got a user-friendly Log Console without even really trying at all. 🥤😎 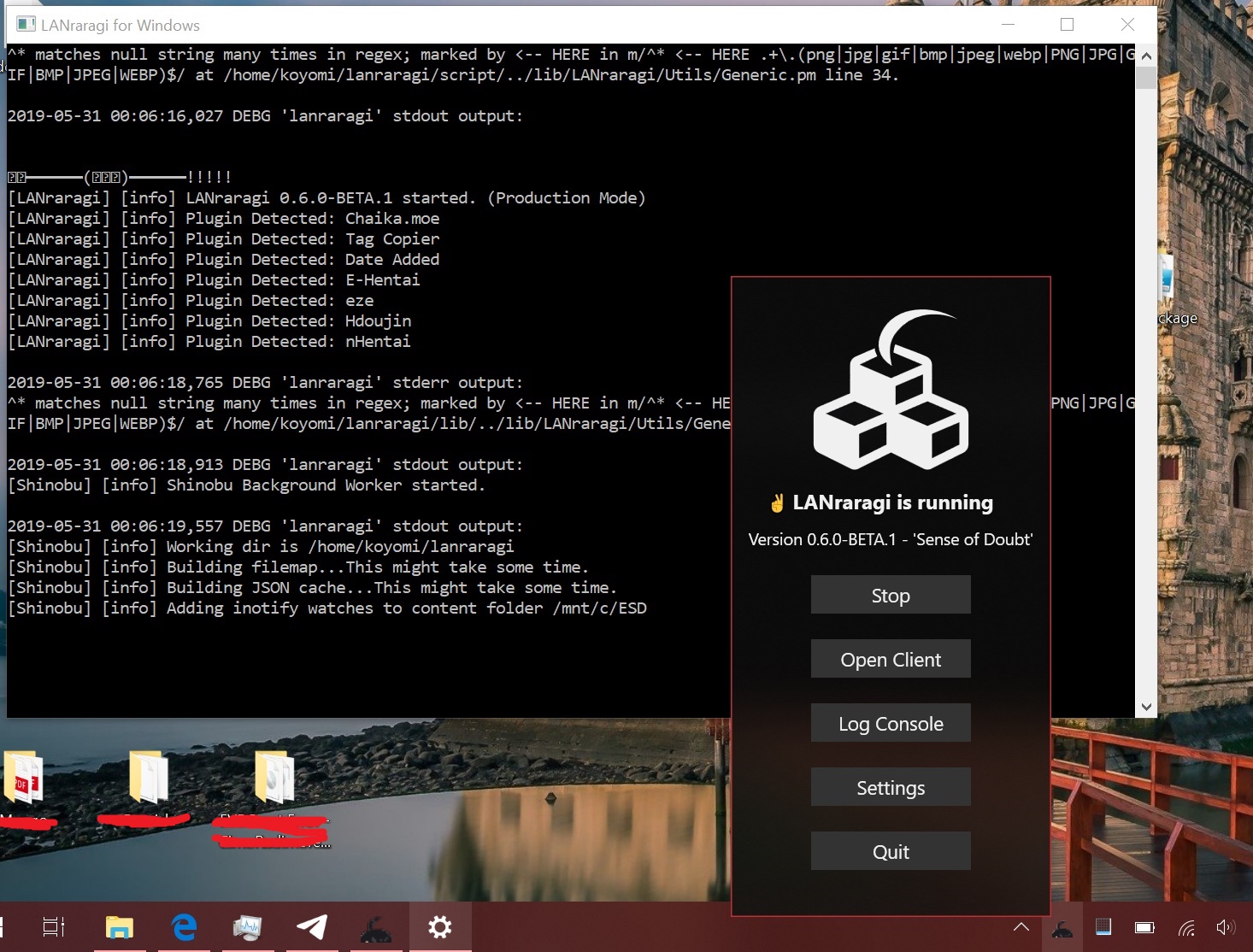 This is just the console created from AllocConsole, shown and hidden when the user clicks the "Log Console" button. The NuGet package adds some extra sorcery to make sure closing the console simply hides it again.

Packing up an entire WSL distribution seemed way too clumsy to pull off at first, but Microsoft's tooling actually makes disposable distros pretty easy to do! I could almost put this on the store if it wasn't for the fact I'm horribly twisting what WSL was originally made for. Please forgive me Rich Turner for I have sinned

My Docker images are pretty lightweight since I went all in on Alpine a few months back, so the full downloadable Windows package clocks in at 85 MBs, with a few more optimizations possible in the future.
That's less than your average Electron application. 😏

You can check the full source code for this crazy thing here. Thanks for reading!